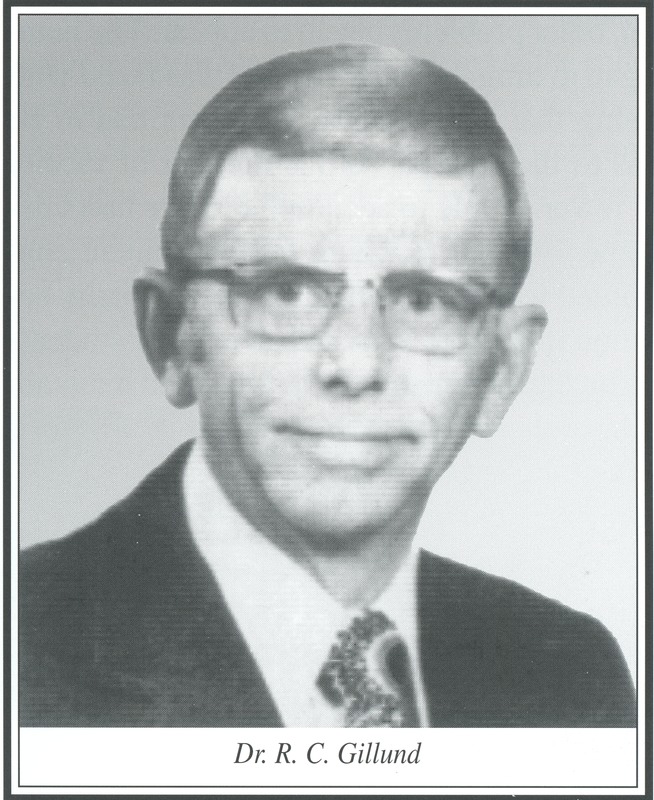 The sixth president of Dickinson State College came to the position via a different route than his predecessors. A search committee composed of faculty and administrators from the college, working with members of the State Board of Higher Education, selected Dr. "Cam" Gillund as the man who could best fill the position. Accordingly, Dr. Gillund and his family were in position to begin new duties on July 1,1969.

A native of the state, "Cam" graduated from high school in Nome, North Dakota, in 1940. After his war time service, he attended Long Beach Junior College in California, where he received an Associate of Arts Degree. Between 1949 and 1963, he attended the University of North Dakota three times. His first degree from that institution was the bachelor’s degree with a major in business administration. During his second stay at the university, Dr. Gillund chose to major in secondary education and elementary principalships. In 1962, he received his Ed.D. degree with a major in Higher Education Administration and Teacher Education. Post graduate work was done at the University of Wisconsin, the University of Minnesota, and Southern Oregon State College.

Dr. Gillund's teaching career began at Wildrose, North Dakota, followed by a variety of positions throughout the state. He served as a coach, an elementary and high school principal, and a director of counseling and testing. Service on the Visitation and Appraisal Committee of the National Council for Accreditation of Teacher Education was an important part of his professional career, as was his membership in the American Association of Colleges for Teacher Education.

Active in community events, he was a member of the American Legion, the Elks Club, Kiwanis Club, and worked with the United Fund Campaign and the Boy Scouts. Rotary Club and Lions Club claimed him as a member, and he was an active participant in the organization of Rough Rider Days, the 4th of July celebration in Dickinson which originated in 1971. He participated in the work of the American Lutheran Church as secretary to the church council and as a Sunday School teacher.

Prior to his career in education. Dr. Gillund managed a John Deere implement agency, a J.C. Penney store, and farm property in Bottineau County. He was also the Vice President of the Barnes County Abstract Company in Valley City. Married to the former Geraldine Christiansen, he was the father of two sons and a daughter, and could be considered an avid golfer, a dedicated gardener, and a prodigious reader.

"Cam" took particular delight in participating in the various activities on the campus at Dickinson. Always impeccably groomed. Dr. Gillund remembers that he sometimes changed clothes and shaved several times a day to be appropriately dressed for the times he would spend with alumni, students and guests. One of his fondest memories was the time he had a cameo role in a Summer Theatre production in Sosondowah.

An especially congenial man, Dr. Gillund was always quick to show his appreciation of those who worked with him. As a result, when he retired in 1977, he and his family took with them the best wishes of the students and faculty of "The College on The Hill."