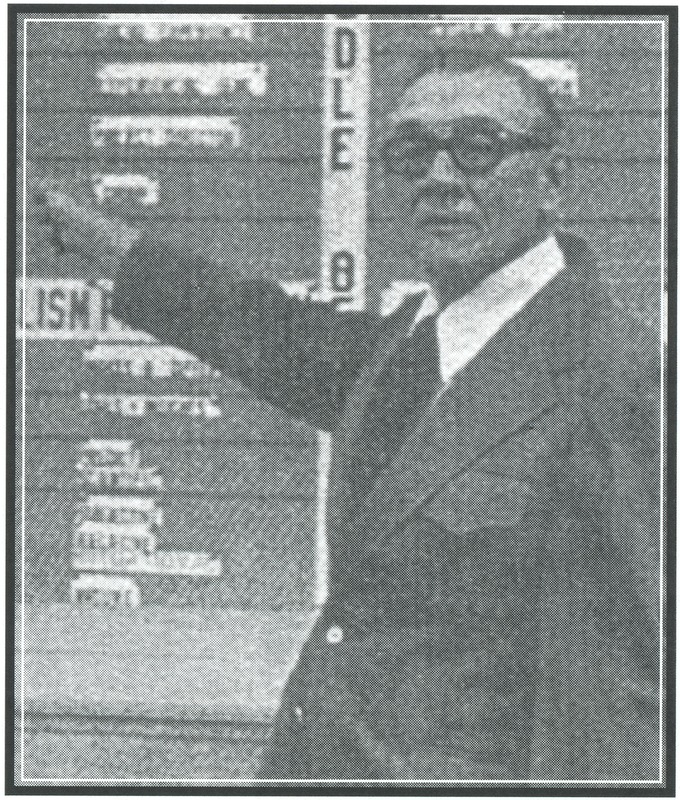 Oscar DeLong was a product of the pioneers and the pioneer heritage of the Dakotas. His paternal grandfather, a veteran of the Civil War, retired from that conflict with the rank of Captain, and came with his father and two brothers to the Dakota Territory in 1868. He and his family settled in what was to become South Dakota. He was one of the state leaders who was instrumental in the decision to establish Bismarck as the site of the territorial capital.

Oscar's other grandfather, Oscar Dunlap, also a Civil War veteran, sacrificed an arm and a leg in the service of the North. In 1890, Mr. Dunlap, for whom Oscar DeLong was named, came to South Dakota with his family and homesteaded there.

Oscar was the second child born to his parents, arriving in 1902. He grew up on the farm, attending rural one room schools throughout his childhood. By taking a special examination, Oscar received credit for his eighth year of elementary school and went on to high school. By the time the DeLong children were ready to go to high school, financial and transportation considerations had made it possible for their attendance.

His father had decided that a high school education was adequate for the young man, as he was determined that Oscar would take over the farm when he matured. However, Oscar had seen enough of farm life to know that he wanted a different life, so he bargained with his father, making it possible to attend the University for six months (with no financial help from his parents), and help on the farm in the spring and summer months. During those months he also took extension and correspondence courses, so it was possible to graduate in four years.

Without his family's financial assistance, college life was difficult, and Oscar had to work at various part-time jobs to pay his expenses.

In 1926 he married Thelma Gillette, and that year they graduated together from college, unusual because at that time it was rare for college students to be married. The couple ultimately had two sons and a daughter.

DeLong's teaching career began in Geddes, South Dakota. The DeLongs stayed in Geddes for six years, then moved to Wagner, South Dakota. Dr. DeLong attended summer school for thirteen summers consecutively, an indication of his belief in the importance of education. In 1944,the DeLongs moved to Milbank, South Dakota. The completion of his doctoral studies had made it possible to enter the ranks of college teaching, and in 1946 he was selected as Dean of Education at Minot State College.

He served there for eight years, then was selected as President of Mayville State College in 1954. In 1958, President Charles E. Scott, knowing he would soon retire, urged DeLong to apply for the position of president of Dickinson State. He applied for the Dickinson job and in 1959 was selected.

During his administration eleven new building were added to the college on the hill. The enrollment soared. Dr. DeLong also was responsible, through dedication and perseverance, for maintaining the accreditation of the college by NCATE(National Council for Accreditation of Teachers Colleges) The lack of accreditation would have been a severe blow to the standing of the college, and DeLong's fight to retain it was notable in the annals of both the institution and the accrediting agency.

Dr. DeLong retired as president of Dickinson State in 1969, but continued to teach education courses at the college for five years. Just before his retirement. Dr. DeLong completed writing and guiding through publication a book about one of his interests — Group Dynamics.

In 1975, Dr. and Mrs. DeLong moved to Mesa, Arizona. Golf continued to be a fulfilling pastime for Dr. DeLong, as did swimming and working in the yard he loved. He also continued to write.

During Mrs. DeLong's long descent into Alzheimer's disease, he maintained a poignant Journal of the effects of that disease on a lengthy marriage.

The college honored him with the Golden Moccasin award in 1987, and the community feted him with a Pioneer Recognition award in 1990. Both honors reflect the continued esteem in which Dr. DeLong was held in the Dickinson Community.

Mrs. DeLong died in 1990, and Dr. DeLong later married Dr. Winifred Stump, whom he had hired as an instructor in 1962, and who was, at the time of their marriage, serving as Dean of Arts and Sciences at Dickinson State University. The couple made their home in Mesa until Dr. DeLong's death in 1996.